Editors Note: Michael Kosteljanetz is Senior Consultant, Dr. Med. Sci. at the Department of Neurosurgery at Rigshospitalet University Hospital in Copenhagen. On several occasions, Michael has been working and teaching in Rwanda and Ethiopia, where his expertise in his profession is an urgent needed. Michael here describes his experiences with the challenges of working at a hospital in a ressource-poor setting. This article was originally written for students at the Engineering World Health Chapter at the Technical University of Denmark to prepare them for working in developing country hospitals, however it is highly interesting material for anyone with just a slight interest in developing countries!

It would not be fair to judge the entire developing world based on personal experience which stems from a brief stay in Addis Abeba, Ethiopia, where I worked at a private Christian hospital and a large public university hospital and three stays in Kigali, Rwanda, where I have worked for a total of 6 months in a public, teaching hospital as participant in a large American-Rwandan project. My daily work takes place in the hospital’s surgical department.

Rwanda’s situation may be different from the situation in other African countries, because the shortage of health personnel here largely is a consequence of the genocide in 1994, where approximately one million people were killed, and among them a great number of health workers. Besides, a great number of people fled to the neighbouring countries and Europe or America.

In many ways Rwanda is a well organized country, partly because of its small size, approximately 2/3 of Denmark. It is very densely populated, almost 11 million people live there. There is a network of roads, the main roads are paved and there is a well developed network of buses that takes you almost anywhere in the country. Mobile phone penetration is around 50% (in 2012), internet approximately 10%.

In my specialty, neurosurgery, there are two neurosurgeons that serve the population, both work in the capital Kigali, where one million people lives. One works at a private hospital, the other at the university hospital. The two departments are affiliated and patients can be transferred from one hospital to the other under certain circumstances.

The hospital where I worked is one of 3 or 4 greater referral hospitals. The country has a great number of health centres, more than 40 district hospitals, most of them run by nurses and general practitioners, who can perform a limited number of operations, e.g. caesarian section. In a few district hospitals there are surgeons who can perform ”neurosurgical” operations e.g. shunts for hydrocephalus.

Although the economy is growing, the country is still poor, the average income being 1/30 of that in Denmark, which of course has major influence on the quality of healthcare delivered. More than 90% of the population has a health insurance, which is very uncommon for an African country. In most cases the patients have to pay 10% of the expenses, which in a poor country like Rwanda may be more than they can afford, even though it amounts to what we would consider a minor expense, say 50 or 100$.

The University Hospital of Kigali, Rwanda was originally built almost 100 years ago and almost all buildings which are pavilions are more than 70 years old, which means that facilities and logistics are far from satisfactory. Most rooms have 8 or more beds. Washing and toilet facilities are of course very scarce.

There is one CT scanner at the university hospital, however, it may not always work. X-ray films are not always available, so most often it is not possible to get print-outs of the scan. Even if one gets one it will only depict a fraction of the entire examination; as a consequence not all aspects and angles of the disease are depicted, sometimes making it very difficult for the surgeon to make a professional decision based on the CT, just as surgical and treatment planning may be challenging. X-rays and scans cannot be transmitted electronically, so in order to discuss a case with a colleague, say when a transfer is considered, one has to take a photo of the scan on one’s smart-phone and send it and again, for which reason the image quality is a challenge. If the patient needs a MR scan they have to go to the private hospital where the only MR in the country is, but the same remarks that apply for CT goes for the MR as well.

The Operation Theater was built in 2009, but in spite of that it is already worn down, most likely because it was built with the poor materials. Many of the tiles in the floor are broken, so that water can collect in the small cavities that have been formed, the humidity has penetrated the ceiling in the theatres so that there is visible mould in most operating rooms. Because of the humidity, but probably also because of poor quality, whatever that can rust has become rusty; the wheels on most tables, where surgical instruments are placed during surgery are broken so hardly any table can roll. Legs of tables and stools are broken or at least most times broken so that they stand askew. The Danish ”Arbejdstilsyn” (Danish Working Enviroment Au- thority, red.) would immediately close the operating theaters due to the electrical installations. Electric lines and sockets runs across the floor even though it is regularly wet from the cleaning and sockets in the walls are faulty. Many of the lights and the operation lamps do not work properly and 1 or 2 out of 4 bulbs often do not work. The doors to all operating theatres are broken, so that they can neither open or close, meaning that they are more or less open most of the time, also during operations, which is practical because the personnel tends to come in and out of the room. Since the sun shines most of the time the room gets hot, and the ventilator switch cannot be reached by most people of average height. The windows have no shadow so the sun shines and sometimes blinds the surgeon.

Operating tables cannot be adjusted electronically as they could when they were new and even to adjust them manually is difficult. Suction equipment which you need to suction away blood during an operation is faulty. The main reason being that the disposable suction tubes, like many other disposable consumables are used not one but several times leading to a change in the stiffness of the tubes, so that they collapse, when suction is activated.

Since the surgical instruments themselves often are robust, made by steel, they are usually working but even simple instruments may not be available.

Now, while you can perform a great number of abdominal operations with a very limited number of instruments, neurosurgery is for the most part a hightech area. Scissors and scalpels almost always work, especially when they are sharpened. Most surgeons use suction, which I have described and a bipolar, which is a kind of electrical tweezers that can burn tissue in a very limited area and thereby induce coagulation of vessels and stop bleeding. Contrary to other surgical fields, bleeding in neurosurgery cannot be stopped by ligature of the bleeding vessel. Our bipolar has been repaired with adhesive tape, so that it works most of the time, which it did not the year before.

Essentially problems related to the operating theaters can be divided into:

Logistic problems include poor planning and surveillance of the daily surgical plans. If one wanted to be sure that the cases one had planned would be brought to the OR, it was mandatory to be present in the OR, meaning that one could not leave the OR for rounds or seeing patients in the out–patient–clinic while waiting for the preparations for the operation. Because of the long and awkward routes from the wards to the OR (among other things), waiting time before and between operations were often 2-3 hours. Part of the waiting time could sometimes be explained by shortage of a consumable that had to be procured or instruments that were not sterilised.

Roughly the above mentioned can be divided in a) shortage of fundings for buildings, including repair and maintenance b) shortage of skilled personel c) lack of resources for training and education of personel e) logistic problems.

To which extent one or more of these issues are more important than others cannot be concluded from my non-scientific observations, neither can I conclude which means are most appropriate to solve the problems. This will demand further analysis. Considering that Rwanda is a country where the economy is steadily growing there is a chance that some of these problems can be solved because of improved funding but other problems could be dealt with in the meantime.

Note: Neurosurgery is the specialty that deals with the surgical treatment of diseases and congenital conditions and injuries in the central–nervous–system, that is the brain, the nerves, the spinal cord and the surround- ing tissue (meninges and skull and verter- bal bodies). The neurosurgeon removes e.g. tumours, haemorrhages, aneurysms. Some neurosurgeons mainly operate on the spine.

Authored by Michael Kosteljanetz, edited by David Kovacs. Published by the Engineering World Health chapter at the Technical University of Denmark. 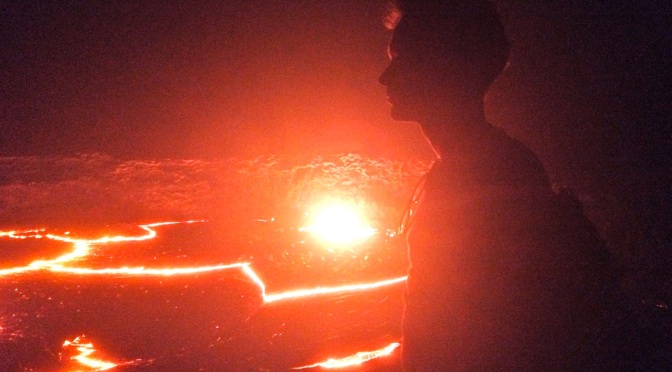 People around here believe it is the gateway to hell…

Sure enough it’s an intimidating experience: Its in the middle of the night and just few meters away waves of lava are splashing into the mountain side spraying lava up into the horizon in front of us.

Located at 160m below see level the Danakil Depression is the lowest, hottest and most hostile place on earth. The vulcanically active areas found in this desert are surreal: they look like something from a different planet. Some friends I have shown these pictures thought they were manipulated. They are not.

The Danakil region is inhabited the Afar people and their salt miners go here to chop salt blocks from the flat grounds. Caravans go from Afar Salt Mines to Mekele, the nearest large town, where 5 kg blocks of salt are sold for 22 Ehtiopian Birr, the equivalent of just one American dollar.

In September (2014) I went to the Lava Lake at Ert Ale (smokey mountain). The following days we saw a salt lake, a sulphur lake, salt mountains, an oil lake and the salt miners of the Danakil. 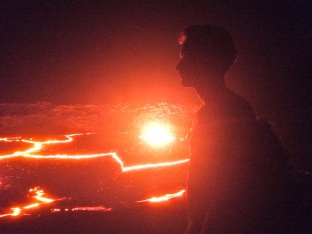 By the Lava Lake on Ert Ale at midnight

The lava lake on top of this erupting volcano: wathing a volcano erupt “live”.

When We started climbing there was still a storm. Lightings were so frequent that one could easily get a picture

The salt lake in the Danakil Desert is incredible; on a wide stretch everything is completely white.

Sunset at Saltlake with my friend Birhan

The surface was entirely hard

The sulphur lake looks like something from a different planet. Everything is yellow, green, blue, red.

It was 34 degrees celsius at this time but it gets above 50 during the day in the hot season. At this time the whole area is active.

A closer view of the suphur crystals.

The Oil Lake was about 60 degrees warm so you could put your hands in it and be surprise: it really is oil and not colored water. The consistency is litterally like oliveoil. I can’t recommend tasting it, it burns quite badly.

See more photos on the page for the Danakil Depression.

"It needs to be done, and not enough folks are doing it."